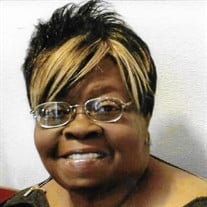 Susan Marie Gooch, 66, passed away peacefully, surrounded by her children and sister on February 25, 2020 in Cumming, GA. Visitation will be Saturday, March 7, 2020 from 9:00 A.M. until time of funeral services at 11:00 A.M. at Lax Mortuary. Pastor Larry Sykes Jr. will officiate. Burial will be in Momence Cemetery. Susan Marie Gooch was born March 16, 1953 in Kankakee, IL, the third of nine children born to Frank and Bertha Johnson. She attended Momence High School and was of the Seventh Day Adventist faith. She was united in holy matrimony to the late Neverette Gooch on October 1, 1969 and their union was blessed with four children and two step-children. Susan was an artist and homemaker. She had a witty sense of humor and enjoyed fishing, drawing, doing crossword puzzles, reading the Bible, dancing and shopping for her grandchildren. She leaves to cherish her memory, one son and daughter-in-law, Neverette and Shawonna Gooch of El Mirage, AZ; five daughters and two sons-in-law, Katrina and Andrew Hayes of Peoria, AZ, Katavia Gooch of Buford, GA, Kamisha and Raymond Bowen of Goodyear, AZ, Chimere Johnson of Sun River Terrace, IL and Nakita Foster of Nashville, TN; three brothers and two sisters-in-law, Frank and Lynn Johnson of Chicago, IL, Reuben Johnson of Kankakee, IL and David and Tanya Johnson of Burbank, CA; three sisters and one brother-in-law, Diane and Edward Bradley of Kankakee, IL, Doris Hill of Alcoa, TN and Patricia Davis of Knoxville, TN; 20 grandchildren; nine great-grandchildren and a host of nieces, nephews, other relatives and friends. She was preceded in death by her parents; two sisters, Janet Sykes and Maggie Collins; one grandson, Jason Rivera Jr. and one nephew, Charles “Bill” Hill.

The family of Susan Gooch created this Life Tributes page to make it easy to share your memories.

Send flowers to the Gooch family.