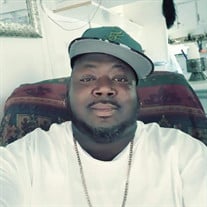 Shurone S. Howard, “RuRu,” was born July 29, 1974 in Kankakee, IL to the late Robert Howard and Bessie Kay Johnson. RuRu attended Kankakee School District until his graduation from high school. RuRu met his wife, Tiafeia Arnold in June of 1997 while she was on her way to take care of business at the Child Support Office on Chestnut and Greenwood. He was on his daily stroll to the projects. RuRu put down his mack line and “BAM” he got her with his line, and for 24 years, until his death. God saw RuRu getting weary and tired and was in need of an Angel, so God whispered and said, RuRu come aboard. RuRu boarded his flight on January 16, 2021 at 9:54 p.m. to his destination-Heaven. RuRu leaves to cherish is memory, his wife and companion of 24 years, Tiafeia. God blessed their union with four children, Kimanesha of Minnesota, Keyania (Jessie) of Kankakee, IL, Keywuan (Symone) of Bourbonnais, IL and Jontelle of Minnesota; five siblings, Patricia (Daryl) of Georgia, Camille (Glen) of Arizona, Cynthia of Georgia, Tyrone of Minnesota and Timmy (Corrie) of Georgia; three special brothers, Kevin (Kenyatta) Chandler, Richard (Andrea) Willingham Jr. and Otis (Nish) Powell Sr., all of Kankakee, IL; four aunts, Betty Jean Logan of Hopkins Park, IL, Rose Johnson, Elmira Banks and Taren Howard, all of Kankakee, IL; two uncles, John Howard of Kankakee, IL and Joe Howard of Oak Park, IL; a host of in-laws, Meaka Jones and J. B. Brown Jr., both of Alabama, Shelly Chaney, Corrina Toney, Bernard Wandick and Sarah Ireland, all of Kankakee, IL, Ella (Troy) Jenkins and Joseph James of Chicago, IL, his mother-in-law and father-in-law, Mae Brown and J. B. Brown Sr.; the loves of his life, six grandchildren, Kahyia, Kyra, Kobie, Kari, Jystice and Jordyn; his Godmothers, two true prayer warriors who have prayed for him a many hospital stays, Gail Hill and Vera Brackins; three special caretakers who helped take care until his death, Cynthia Brackins, Carol Magee and Keyania, A.K.A., Fatty Nannie; special friend, Pierre Carthon of Kankakee, IL, and a host of other relatives and friends. He was preceded in death by his parents; a brother, Donnie Ireland; a cousin, Kenya Armstrong; best friends, Peanut and Marshall Billips and several aunts and uncles.

The family of Shurone Howard created this Life Tributes page to make it easy to share your memories.

Send flowers to the Howard family.