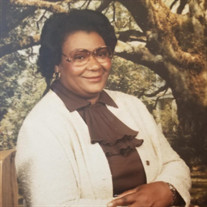 Shirley’s Life Journey A time to be born: Shirley Mae Hood was born on September 14, 1934. She was the first of two children. Her parents were John Hunter Jones and Jimella Jones. In the height of the Great Depression, Jimella died at an early age. She left her mother, Lucy Nichols Sykes Jones, to raise and lovingly rear her children, Shirley Mae being one of them. Shirley always referred to her grandmother as “Momma Lucy.” A time to speak: Shirley confessed Christ at an early age at Mount Zion Missionary Baptist Church in Columbus, Mississippi. She was baptized in the southern waters of the Tom Bixby River. Shirley joined Shiloh Missionary Baptist Church in Kankakee, Illinois in the early 60’s. She loved the Lord and served many years in ministry as a member of the choir and on the mothers’ board. A time to grow: Shirley attended R. E. Hunt High School where she obtained her high school diploma. She also pursued informal avenues of training to develop additional life skills that would carry her through her life. At the age of 10, Shirley had to find work to support her family. God used this experience to shape her into an excellent homemaker, cook, and gardener. In addition, Shirley had an interest in cosmetology. Under the instruction of her aunt, she learned how to cut and style hair. If customers received a press and curl from Shirley; they knew their hair was going to be “fried, dyed, and laid to the side.” Shirley naturally had a heart of a servant. She always wanted to help and serve others. This characteristic led her to work in the field of mental health. She worked at Manteno Mental Health Center and Ludeman Developmental Center for nearly 30 years where she started as an entry-level technician and worked her way up to a unit supervisor. She had compassion for people and would often sacrifice her needs for others. Shirley enjoyed hobbies such as fishing, gardening, and singing with her beautiful soprano vocals. A time to love: Shirley met Charles Ezell Hood in Chicago, Illinois through a close family member. They had their first date at the notorious Bud Billiken Parade. They began a romance and soon committed themselves to one another in holy matrimony on April 7, 1956. To their union was born six children. A time to die: Shirley fought the good fight and in due season, heard the voice of Jesus Christ calling her home. She departed this life on Friday, July 16, 2021. She was preceded in death by her husband, her parents, her grandparents, her aunts, and her uncle. A time to mourn: Shirley leaves to mourn four sons: Lester (Beverly) of Kankakee, IL, Charles of Rex, GA, Joe (Jerolynn) of Conyers, GA, Michael (Josephine) of Plainfield, IL and two daughters: Susan (V’Arthur) of Matteson, IL and Charlene of Plainfield, IL, one sister: Joan (Atrice) Virgil of University City, MO, 10 grandchildren, two great-grandchildren and a host of nieces, nephews, and cousins.

Shirley&#8217;s Life Journey A time to be born: Shirley Mae Hood was born on September 14, 1934. She was the first of two children. Her parents were John Hunter Jones and Jimella Jones. In the height of the Great Depression, Jimella died at... View Obituary & Service Information

The family of Shirley Hood created this Life Tributes page to make it easy to share your memories.

Shirley’s Life Journey
A time to be born: Shirley Mae Hood was...

Send flowers to the Hood family.