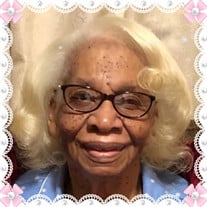 Roma Jean Williams was born May 8, 1930 in Jenkins, Letcher County, Kentucky to Beulah and Reverend John Watson Moss. She accepted Christ at a young age under the guidance and leadership of her late father. She moved to Chicago, Illinois where she lived with her family until her union to Hardy Poindexter on June 23, 1948. From that union, four children were born, Kevin, Ronald, Gail and Margaret. She was later united in marriage to Emmitt Williams on June 23, 1964. From that union Danny was born. Emmitt and Danny both preceded her in death. She moved to Sun River Terrace, Illinois in 1970, where she remained until the Lord called her home. She loved to serve and gravitated to work that gave her the opportunity to do just that. She retired from Shapiro Developmental Center after 25 years of service. Shortly after retiring, she went to work as a Foster Grandparent in the Foster Grandparent Program of Kankakee County Illinois school system, retiring after 18 years. She had a gentle caring spirit that she freely shared with everyone she came in contact with. In every city that she lived in, she found a church home and served on the usher board. Her membership was with Mt. Calvary Missionary Baptist Church in Sun River Terrace, Illinois. She served under the leadership of Pastor Alex T. Bond Jr., until her health declined. Roma Jean Williams passed away peacefully at home. She fought a hard and great fight with Alzheimer’s and gained her eternal wings on March 31, 2022 at the age of 91. She is survived by her children, Kevin (Trenell), Ronald (Kim), Gail and Margaret. She was a grandmother, great-grandmother and a great-great-grandmother. She was preceded in death by her siblings, John, Wilbert, James, Gertrude, Lurlean, Juanita and Maggie. She will be truly missed by all, but definitely not forgotten. Beloved Mother, Grandmother, Aunt and Friend. We will carry you with us the rest of our lives! We love you.

Roma Jean Williams was born May 8, 1930 in Jenkins, Letcher County, Kentucky to Beulah and Reverend John Watson Moss. She accepted Christ at a young age under the guidance and leadership of her late father. She moved to Chicago, Illinois where... View Obituary & Service Information

The family of Roma Williams created this Life Tributes page to make it easy to share your memories.

Send flowers to the Williams family.