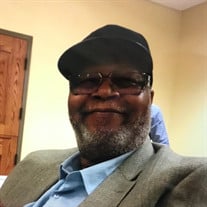 Percy Hale Sr., the fifth of eight children, was born September 22, 1947 in Minter, AL to John Arthur and Inez Rivers Hale. He graduated from Parker High School in Birmingham, AL and went to Washburn Trade School in Chicago, for painting. He was a painter tradesman and a member of Painters Local Union 1322. He was employed by the Chicago Transit Authority for 26 years. Percy was a resident of the Pembroke area for over 20 years. He enjoyed fishing, hunting, farming and cookouts. He loved to read and was knowledgeable about the Bible. His friendly, generous nature caused everyone to love him. He volunteered in Boy Scouts and participated in workshops where he shared his experience with Civil Rights, including his involvement in the Selma march. He leaves to cherish his memory, and mourn his passing, two loving sons, Percy (Angela) Hale Jr. of Aurora, IL and Joshua Hale of Chicago, IL; one loving daughter, Patrice (Jimmie) Rogers of Bloomington, IL; two special daughters, Felicia (Kevin) Collins, and Sharon Robinson of Indiana; one brother, Melvin Rivers of Detroit, MI; two sisters, Berna “Bunny” Hale and Adele Rogers, both of Detroit, MI; a sister-in-law, Roxie Rivers of Pembroke Township, IL; his fiancée, Sarah Adams of Chicago, IL; five grandchildren, Jimauri, Jimel, Demarquis, JC and Jayce, and a host of other relatives and friends. He was preceded in death by his parents, and four brothers, Dewhite, Willie, John and Perry.

The family of Percy Hale Sr. created this Life Tributes page to make it easy to share your memories.

Send flowers to the Hale family.