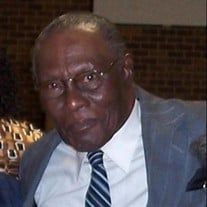 The Honorable Bishop Melvin R. Deal passed away on July 24, 2021 in Kankakee, Illinois. He was born in Okolona, Mississippi on January 31, 1929 to the parents of Will and Rosa Deal. He met and married Iona C. Deal in September 1951. They were the parents of two daughters, Irene Cole and Vernetta Love, and one son, Melvin R. Deal Jr. of Illinois. The Honorable Bishop Melvin Deal served as a sergeant in the United States Army as he fought in the Korean War. He worked at several jobs but retired from Sears in the early 70’s. Bishop Deal was baptized in Jesus’s Name and received the Holy Ghost under the leadership of the late Diocesan Bishop Charles E. and Evangelist Mattie B. Poole. There he served on the usher board, the nursing board, the missionary board, the painter’s committee, the plumber’s crew, the minister’s board, the grievance committee, the prison and outreach ministry, the foreign mission committee, District Elder, and numerous other committees. The Honorable Bishop Deal loved his wife of 70 years and his children, grandchildren, and great-grandchildren. He had a special love for the church of God and for the Christ Healing Temple family. He would always say the church was his life. He and his wife relocated to Pembroke Township, Illinois. They co- founded Christ Healing Temple Apostolic Church where he served as pastor from 1969 until the time of his death. Under their leadership many souls turned to God and many were delivered and healed of diseases. Bishop Deal was known for his wisdom and quick humor. He was an old school preacher who sat under the teachings of the late Bishop S.C. Johnson, Bishop Haywood, and others who believed in crying against sin. He was preceded in death by his loving and devoted wife of 70 years, Iona, two daughters, Irene and Vernetta, a grandson Jessie Lilly, his parents, Will and Rosie Deal, his brothers, Henry Lee, Alonzo, and Winston Deal, his sisters, Lucille Bryant-Reeves, Queenola Lee Deal-Jones, Magnolia Deal-Stevens. He also leaves to cherish his memory, one son, Melvin R. Deal Jr. of Illinois, a sister-in-law, Mrs. Kizzy Wade of Gary, IN, two grandsons, Melvin Shaw and Sidney Lilly of Illinois, one granddaughter, Vickie Shaw of IL and other grandchildren. He also leaves a host of great-grandchildren, great-great-grandchildren, nephews, nieces, cousins, church family and friends.

The Honorable Bishop Melvin R. Deal passed away on July 24, 2021 in Kankakee, Illinois. He was born in Okolona, Mississippi on January 31, 1929 to the parents of Will and Rosa Deal. He met and married Iona C. Deal in September 1951. They were... View Obituary & Service Information

The family of Bishop Melvin Deal Sr. created this Life Tributes page to make it easy to share your memories.

Send flowers to the Deal family.