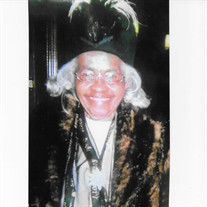 Mary M. McCarty was born Mary Magdalene Lloyd on January 9, 1929 in Pope, Mississippi to the union of Chalmus and Robbie Lloyd. She was the second child of a set of twins of four children born to this union-Ruby, Mary, Martha and Willie Earl Lloyd. The family traveled back and forth from Pope to Courtland, Mississippi for church, where Mary was baptized at an early age under Elder Ford. Mary went to school in Pope, Mississippi. The family moved to Robbins, IL in 1948 and joined a community church there under Pastor Jones. Mary met Cleatie Ivy in 1952 and they later married and in 1959 moved from Robbins to Momence, IL. Mary’s husband farmed and they raised and grew their meats, vegetables and fruits. She loved gardening, canning and preserving fruits and vegetables. She worked at St. Mary’s Hospital and for Kroehler Furniture Company. In 1970, life changed with the passing of Cleatie. With her children all grown, she left Momence in 1973 and moved to Kankakee, IL and started going to True Vine Church of God in Christ under Pastor Abram Lane. She met and courted Evangelist Lonnie McCarty and in February of 1975 they were married. She went to work as a housekeeper and worked for several families, the Kennedys, the Sales, Attorney Bigott and the Martells. Her husband became ill in 1993, she took care of him until the Lord called him home in 1997. She joined Fair Haven Church of God in Christ in 1995. She loved going to church, going out to eat with her friends and talking with her friends. To her that was pastime. She served on the Mother’ Board. In 2018, Mary became ill. It was hard to walk or drive so she learned to stay home; calling friends and talking on the phone. She had arthritis. When it got where it was hard to hold a phone, she would state, “I am going home soon.” Our Lord called her and she left 11/23/2020 and went home to be with Him. She touched many with a handshake and a beautiful smile and generosity. She would give you what you asked of her, if she had it. Mary McCarty leaves to cherish her memory, sons, Walter (Cateena) Ivy of Kankakee, IL and Maurice (Norma) Lloyd of Momence, IL; a daughter, Mary Ann Lloyd of Chicago, IL; stepdaughters, Cleatie Ivy Butler, Curtis Butler of Hopkins Parks, IL, Halsie Ivy Mosley of Kankakee, IL and Cynthia Pickens-Rhodes of Champaign, IL; sister, Ruby DeBose of Harvey, IL; sister-in-law and best friend, Lucille Ivy of Sun River Terrace, IL; sister-in-law, Annie Lloyd of Harvey, IL; special cousin, Maxine Jones Henry of Anchorage, Alaska. She was a mother and aunt to her twin sister’s children, the Smalleys, Shirland, Jerry, Jewel, Malinda, Earlean, Kenny, Kathleen, Dennis, John, Denise and James. Special friends, Tabytha Dunigan, Vietta Coffee and Mother Baptist. 16 grandchildren; nine great-grandchildren and a host of nieces, nephews, cousins and friends. She was preceded in death by her husbands, Lonnie McCarty and Cleatie Ivy; grandchildren, Kellie K. Ivy, Rockmon C. Ivy and Martha Smalley; brother, Willie Earl Lloyd; her parents, Chalmus and Robbie Lloyd; eight aunts, one uncle; three sisters-in-law and four brothers-in-law.

Mary M. McCarty was born Mary Magdalene Lloyd on January 9, 1929 in Pope, Mississippi to the union of Chalmus and Robbie Lloyd. She was the second child of a set of twins of four children born to this union-Ruby, Mary, Martha and Willie Earl... View Obituary & Service Information

The family of Mary McCarty created this Life Tributes page to make it easy to share your memories.

Send flowers to the McCarty family.