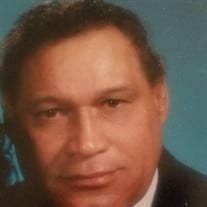 Leonard Verne Harper was born April 29, 1931 in Massac County, IL to William and Lubertha Johnson Harper. He was a member of Faith Baptist Church. Leonard served in the United States Army from March 25, 1953 until his honorable discharge on April 21, 1955. He was united in holy matrimony to the former LaVerne Morgan on November 2, 1956 in Chicago, IL and to their blessed union, ten children were born. He was employed by the Illinois Department of Transportation for over 23 years. He was also an avid farmer, at one time raising livestock in addition to growing his crops. At harvest time, he took great pride in sharing with others. Leonard was an extremely hardworking man and was exceptionally disciplined. He imparted these ethics to his children. He loved his dogs and enjoyed fishing. He leaves to cherish his memory, four sons and daughters-in-law, James and Valerie Harper of Champaign, IL, Gregory Leonard and Ora Lee Harper of Kankakee, IL, Michael and Dawn Harper of St. Anne, IL and Reginald and Christine Harper of Columbia, MO; three daughters and two sons-in-law, Lynn and Frank Johnson and Angela Harper, all of Kankakee, IL and Regina Harper-Young and Gregory Young of Elgin, IL; brothers and sister-in-law, James Crossland of Champaign, IL, Perry and Alice Crossland of Joppa, IL and Billy Crossland of Cairo, IL; sisters, Eudora Crim of Golconda, IL, Gloria Crossland of Chicago, IL, Judy Chambliss of Decatur, IL and Peggy Patterson of Birmingham, AL; a sister-in-law, Mae Miller of Flint, MI; 30 grandchildren; 59 great-grandchildren; five great-great-grandchildren, and a host of other relatives and friends. He was preceded in death by his wife, LaVerne Harper; one son, Christopher Harper; two daughters, Sylvia Harris and Toni Harper and one grandson, DeShawn.

Leonard Verne Harper was born April 29, 1931 in Massac County, IL to William and Lubertha Johnson Harper. He was a member of Faith Baptist Church. Leonard served in the United States Army from March 25, 1953 until his honorable discharge on... View Obituary & Service Information

The family of Leonard Harper created this Life Tributes page to make it easy to share your memories.

Send flowers to the Harper family.