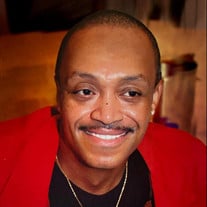 “This is my story”…… My name is Johnny or “JP”. I have been called many names: son, brother, uncle, father, Papa Johnny, and friend. And at last I was called home by My Lord and Savior. I was born Johnny Phillip Hunt on February 23, 1960, in Chicago, Illinois to James and Ceola (Sanders) Hunt. I was named after my uncles Phillip Hunt and Johnny Sanders. I was the last of nine children born to this union. I was preceded in death by my father and mother, two brothers, Willis Hunt and Charles Hunt and one sister, Joyce Hunt. I was a member of Morning Star Missionary Baptist Church under the leadership of Rev. William H. Copeland. I served my country as a Marine in the USMC as a Lance Corporal from June 1979-August 1983 after being honorably discharged. I attended the University of San Francisco. I worked for the United States Postal Service and retired after 30+ years. I loved music, singing, fishing, and I had an awesome Jersey collection. I departed this life at 2:25 p.m. on Monday, November 23, 2020 in the presence of my daughter Joyce and sister Eula. I leave to cherish my memory, one daughter, Joyce Hunt and granddaughter, Jayda Kennedy, one step-son Jorge Brown; five sisters, Olivia Palmer, Alma Hunt, Mary Witherspoon, Eula Hunt, and Solonie Hunt; one sister-in-law, Joanne Hunt; four brothers, James (Joanne) Hunt, Leo Hunt, Jonathan Hunt, and Cleophas Hunt, and one brother-in-law, Louis Witherspoon, and a host of nieces, nephews, great-nieces and great-nephews; lifelong friends, Danny Cross and Stevie and Davie Morrow. You’re probably wondering how I was able to pen my own obituary. Well, I will live in the heart of my daughter and the hearts of the rest of my family and friends. I merely went to sleep and passed on into the presence of the Lord which “commenced” my eternal life that will never end. “I have fought a good fight, I have finished my course, and I have kept the faith.” II Timothy 4:7 Johnny Phillip “JP” Hunt

The family of Johnny Hunt created this Life Tributes page to make it easy to share your memories.

Send flowers to the Hunt family.