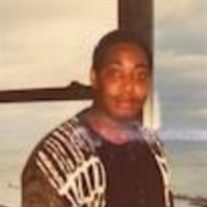 John Vincent Ward was born January 9, 1963 in Clifton, IL to Willie Mae Fletcher and Cecil Ward. John confessed his belief in Jesus Christ as his Lord and Savior at Mount Calvary M. B. Church. John graduated from Momence High School in 1982 where he played football. He also won all area in basketball. John worked at GNB until it closed down. While working at GNB he also played on their basketball team. He also worked at Momence Packing where he was known for his hard work and dedication. John loved every sport imaginable, but had a sweet spot for basketball. He enjoyed watching westerns, listening to music, late night snacking, and being with his friends and family. John had such a large warm gentle heart and made everyone he came in contact with feel like family. John crossed over to his eternal life on Sunday, March 15, 2020. He leaves to honor and cherish his memory, three children, Brandi (Siron) Sims of Bourbonnais, IL, Diamond (Duan) Ward of Kankakee, IL and Vincent (Ricki) Ward of Richton Park, IL; four grandchildren, Jaelan Stewart, Ashia and Siron Sims Jr. and Jaiden Ward; one sister, Cheryl (George) Santaguida of El Paso, TX; two brothers, Cecil Ward of Washington, DC and Allen Piel of Kankakee, IL; special niece, Isha Ward of Kankakee, IL; best friends, Steve Yancy and John Copeland of Kankakee, IL; spiritual father, Rev. Jesse Johnson, and a host of nieces, nephews, other relatives and friends. He was preceded in death by his parents and granddaughter, Diamond “DJ” Gould.

The family of John V. Ward created this Life Tributes page to make it easy to share your memories.

Send flowers to the Ward family.