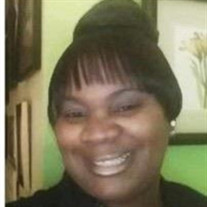 Jeannie Lynn Lightfoot, 48, of Kankakee, passed away on April 1, 2020 at AMITA Health St. Mary’s Hospital. Private services will be held on Friday, April 17, 2020. Burial will be in Momence Cemetery. A Memorial service will be held at a later date. Jeannie Lynn Lightfoot was born on June 23, 1971 in Kankakee, IL to the union of Joseph W. Lightfoot, Sr. and Alice Lightfoot (Stubblefield). Jeannie was the fourth child born to Ms. Alice Stubblefield. She was a native of Kankakee her entire life and was a graduate of Kankakee High School and a devoted member of the Greater New Hope M.B. Church, where she accepted Jesus Christ as her personal savior at the tender young age of 5. Jeannie served faithfully as a minister of music, taking on the responsibility of choir director when she was just 13 years old. Singing and ministering through song was at the heart and soul of Jeannie her entire life. She tirelessly and faithfully helped cultivate the choir over many dedicated years because it was her calling. Jeannie was blessed to have an ear for notes and the gift to put choir members into harmony for the glory of the Lord. She also was part of community choirs, including Kankakee County and District choirs and performed with other local and non-local groups. Jeannie was selected to be a part of the well renowned group, the Rev. Bryant Jones and Chosen of Chicago, where she was chosen to be the featured vocalist on several of their projects. Jeannie was not only a talent in Illinois, but God allowed her to spread her gift nationally and internationally in countries such as France, Sweden, Vienna Austria, Italy, Germany, Monte Carlo and Istanbul. Jeannie was known for her vocal range and her explosive way of bringing listeners into an atmosphere of worship and into the moving presence of God. Her dynamic voice not only sent her ministering around the world, but God also allowed her to share the stage with many gospel artists such as Yolanda Adams, Lemmie Battles, Albertina Walker, Edwin Hawkins, Rev. Clay Evans, David and Tamala Mann, J Moss, Rev. Tim White, Rev. Eric Thomas, Jessy Dixon and Elsa Harris. What an extraordinary gift she was to the body of Christ! Jeannie was blessed to have two sons, Brian Walker and Maurice Walker. Brian preceded his mother in death as well as her grandparents, Pastor Joseph Wills, Sr. and Eliza Wills; her aunt, Joreatha Wills; her uncle, Jerry Wills, Sr.; and her sister-in-law, Carleen Polk (Stubblefield). She is survived by her mother, Ms. Alice Stubblefield of Kankakee, IL; her father, Joseph W. (Minnie) Lightfoot, Sr. of Hot Springs, AR; her son, Maurice Walker of Kankakee, IL; sisters: Alicia (Steve) Evans of Joliet, IL and Keisha Lightfoot-Ellis (Nathaniel, Jr.) of Hot Springs, AR; brothers: George (Sandra) Covington of Phoenix, AZ; Joseph W. (Staci) Lightfoot, Jr. of Kankakee, IL; Keith Stubblefield of Lansing, IL and Travis (Tonya) Lightfoot of McLean, VA; nephews: Joseph W. Lightfoot, III; Sion Lightfoot, Travis Rozia Lightfoot Jr., Rozia Travis Lightfoot, Isaiah Calhoun, and Ta'Jon Ellis; nieces: Jace Lightfoot, Jordan Roche Lightfoot, Roche Tonya-Marie Lightfoot, Tayliyah Calhoun; great nephews: Brooklenn Lightfoot, Malik Guinn Jr.; great niece, Malia Guinn; uncles: Pastor Howard L. Wills, Sr.; Rev. Joseph Wills, Jr., and Sylvester Wills; aunts: Dorothy Wills-Crawford, Carol Wills, Doris Wills, and Ann Wills. She also leaves a multitude of cousins, beloved church family and friends to support the family in carrying on her legacy. God kept His precious promise and returned on April 1, 2020 to take His precious Jeannie home to live with Him, which made the words she sang ever so true, "When I see Jesus, I'll say Amen. All of my troubles will be over; when I see Jesus, I'll say, Amen!" Over there in her new home, Jeannie is listening to the words of our savior, “Well done, sweet psalmist; well done.”

Jeannie Lynn Lightfoot, 48, of Kankakee, passed away on April 1, 2020 at AMITA Health St. Mary&#8217;s Hospital. Private services will be held on Friday, April 17, 2020. Burial will be in Momence Cemetery. A Memorial service will be held... View Obituary & Service Information

The family of Jeannie Lightfoot created this Life Tributes page to make it easy to share your memories.

Jeannie Lynn Lightfoot, 48, of Kankakee, passed away on April...

Send flowers to the Lightfoot family.