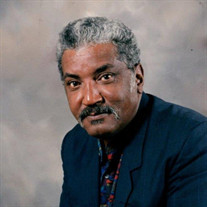 James Richard “Bubba” Cox was born January 18, 1936 in Whiteville, Tennessee to Charles Cox and Ada C. Norment Cox. The family relocated to Kankakee, Illinois in August of that year. He attended local area schools and graduated from Kankakee High School in 1953. He enlisted post Korean War in February 1954 in Chicago for the United States Air Force and achieved the rank of A1C. Three years later in November 1957, he was discharged from Griffiss Air Force Base in Rome, New York. He then entered the workforce, where he held positions such as factory worker/union steward at Quaker Oats for 28 years, from whence he retired in February 1991. Mr. Cox served on the Kankakee City Planning Commission and as a precinct committeeman. He was a member of Caldwell Chapel AME Zion Church where he served as a Sunday School teacher and also served on the Trustee Board. He served in various capacities of the Kankakee County NAACP. James was equally active as a coach for the Kankakee Jaycees Little League, union steward for Local 70, on committees, to end police brutality, to rename Franklin School to Millie L. Proegler, the Wagon Wheel Reunion Committee, and was instrumental in registering hundreds of citizens to vote. He was also a member of the committee to return to one High School, and member of the Black Liberation of Chicago. Mr. Cox enjoyed serving the people on the Kankakee City Council from 1999-2015, and was greatly respected by many. James Richard “Bubba” Cox leaves to cherish his memory, one brother, Clifton Cox of Kankakee, IL; sisters, Lou Anna Hunter of Kankakee, IL, Ruby M. Tate of Joliet, IL, Lois Reid of Markham, IL and Jackie Adkins of Minnesota, and a host of nieces and nephews from California to Bermuda, from Minnesota to Florida, and other relatives and friends. He was preceded in death by his parents; sisters, Gertrude Cox, Cora Lee Garner and Ada L. Johnson; brothers, Edward “Baby Ray” Cox, George Cox, Leander Cox, Booker T. Cox and Ben E. Cox.

The family of James "Bubba" Cox created this Life Tributes page to make it easy to share your memories.

Send flowers to the Cox family.