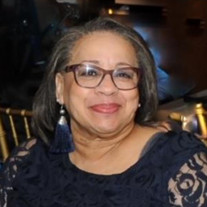 Ethel Holmes was born on November 18, 1952 to George and Cora Ward of Crawford, Mississippi. Ethel was the seventh of seven daughters born to the couple, and she used her status as the baby to her advantage whenever she could! Ethel came to know Christ at a very young age at Oakland Missionary Baptist Church in Crawford, Mississippi. Her faith kept her as she completed her education and moved to Chicago to begin working and rearing her daughter, Terrika. Ethel worked for Greyhound Bus Company for 20 years. Her second career was with Forms Management where she retired in 2015. She was a fiercely independent woman who worked hard from a young age to have what she wanted out of life. To her family’s pleasure and surprise, Ethel met and fell in love with Leonard Holmes, the love of her life, and the couple was married on September 14, 1991. No children were born to this union, but between them they had four children. She loved her two grandchildren and the many great-nieces and nephews that were born into the family over the years. The noisy chaos of Sunday evening gatherings at George and Cora Ward’s house was something she looked forward to on a regular basis. There she could indulge in two of her greatest pleasures: cooking and laughter. Ethel would light up the room when she walked in, and she would always find something funny to say to you or about you, but it was always said in a spirit of love! Ethel departed this life on November 19, 2020, the circle is broken, and there is a void in our lives that she used to fill, but we are comforted in knowing that her suffering has ended and that we all will see her again. She leaves the following beloved family and friends to cherish her memory: Husband, Leonard Holmes; daughter, Terrika R. Willis; six sisters and brothers-in-law: Voneva (Richard) Randle of Battle Creek, MI; Rosie (Lewis) Jackson of Waverly Hall, GA; Eliza (Cleveland) Thomas of Kankakee, IL; Anna (William) Randle of Kankakee, IL; Verga (Clezell) Rainey of Brooklyn Park, MN; Hattie (Murray) Cleaves of St. Anne, IL; brother-in-love, George Stevenson; two grandchildren Emmanuel and Skyler; a host of nieces, nephews, cousins, twelve loving brothers and sisters-in-law, three step-children, twelve step-grandchildren, and dear special friends: Judy Johnson of Dolton, IL, Regina Hewlett of Chicago, IL and Wonda Hall of Chicago, IL Ethel was preceded in death by her parents, George and Cora Ward.

Ethel Holmes was born on November 18, 1952 to George and Cora Ward of Crawford, Mississippi. Ethel was the seventh of seven daughters born to the couple, and she used her status as the baby to her advantage whenever she could! Ethel came to... View Obituary & Service Information

The family of Ethel Holmes created this Life Tributes page to make it easy to share your memories.

Send flowers to the Holmes family.