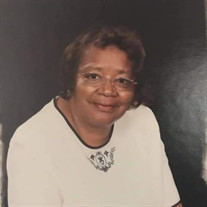 Doris Jean Hairston, A.K.A. Momma, was born on June 18, 1933 and was the loving daughter of Irey and Sally Esther Wesley. She spent her childhood years growing up in East St. Louis (Goosehill), IL, completing her elementary and high school education. In East Saint Louis she gave birth to one son. Doris went on to complete nursing school at Manteno State Hospital. Doris was joined in holy matrimony with JB Hairston Sr. in 1955 and to that union two daughters and three sons were born. Doris also raised a stepdaughter, Carla. Being raised in a Christian household, she confessed Christ and was baptized at an early age. Doris sang in the choir and served on the mission board at Moring Star Baptist Church, Kankakee, IL. She was a faithful servant of God and a beloved family pillar. Doris worked at Shapiro Developmental Center as a mental health tech and excelled to a mental health tech supervisor, and retired after 37 years there. Because of her love for giving, she continued to work at Kankakee Terrance and as a Foster Grandparent at Edison Elementary School. Doris’s other passion was her family. She thought about her children, grandchildren, and great-grandchildren day and night. She was the glue that held the family together. Doris departed this life on October 24, 2020, following a long battle with Alzheimer’s. She leaves to cherish her memory, her children, Irey (Mae) Wesley of Dublin, GA, Esther Worelds of Kankakee, IL, Jennifer Ward of Hampton, VA, Fred Hairston of Kankakee, IL, Wesley Hairston of Des Moines, IA, Sidney (Angel) Hairston of Boyds, Maryland and Carla (Marlow) Whitlow of Bourbonnais, IL; 20 grandchildren; 22 great grandchildren; five great-great grandchildren and a host of other family, and friends. She was preceded in death by her adopted son, Wesley D. Hairston; her loving parents; her sister, Irene Wheaton and her brother, Charles Brooks.

Doris Jean Hairston, A.K.A. Momma, was born on June 18, 1933 and was the loving daughter of Irey and Sally Esther Wesley. She spent her childhood years growing up in East St. Louis (Goosehill), IL, completing her elementary and high school... View Obituary & Service Information

The family of Doris Hairston created this Life Tributes page to make it easy to share your memories.

Send flowers to the Hairston family.