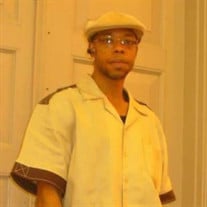 Demond Marcel Caffey was born January 8, 1973, the first of two children born to Robert Buster and Vivian Caffey Thomas. He was baptized at Mount Calvary Missionary Baptist Church in 2016 by Reverend Ricky D. Dixon, and remained a member until the time of his passing. Demond graduated in 1991 from Kankakee High School and received his associate degree and various certifications in 2016 from Richland Community College. He was a forklift driver for various companies and warehouses throughout his career, and resided in the area all his life. Demond was fond of painting, drawing, creating tattoos, making music, designing clothes, cooking, bowling, and dancing. He was often the life of the party who constantly told jokes. His favorite sports were baseball and football. Demond didn’t mind helping others and was known as a hard worker. If ever he was needed, all one had to do was call and he’d be there to help; he enjoyed being with his family, especially his mother and aunt. He was definitely a people person who loved making those around him laugh and smile. Demond leaves to cherish his memory, his son, Kamarius Caffey of Kankakee, IL; his daughter, Dajour Caffey of Kankakee, IL; his mother, Vivian Thomas of Kankakee, IL; his brother and sister-in-law, Troy and LaKeisha Thomas of Portsmouth, Virginia; sisters and brothers-in-law, Chynette and Reginald Thomas, Robin and Cantrell Jefferson and Simone Poe, all of Kankakee, IL and Lakaime Caffey of Sun River Terrace, IL; aunts, Lillian Caffey and Dyan Shannon, both of Kankakee, IL, Esther Love and Shirley Shannon, both of Bourbonnais, IL and Rosalyn Caffey of North Carolina; uncles, James Caffey and Grover (Joann) Caffey of Cleveland, Mississippi, Elmer Caffey of Bourbonnais, IL, Irving Taylor, Cleveland (Eliza) Thomas and Larry Shannon, all of Kankakee, IL, Edward (Pamela) Thomas of Upper Marlboro, Maryland, and David Crisp Sr. of Wausau, Wisconsin; close friends, Obiajah Brown of Pembroke Township, IL, Edward Jennings of Fort Wayne, IN, Demetrius Simmons of Eau Claire, WI, Lamont Hawkins and Shawn Tucker, both of Kankakee, IL, Richard Hunter of Atlanta, GA and Sanford Richardson of Minneapolis, MN and a host of cousins and friends. He was preceded in death by his father, Robert Buster Thomas; his maternal grandparents, Manuiel and Alma Caffey; his paternal grandparents, Buster Thomas and Clara Lee “Claudia” and Leonard “Jabo” Shannon; nephew, Aireon Marcell Caffey; aunts, Zeola Taylor, Delores Dalton, Alma Taylor, Thelma Caffey, Louise Caffey and Sadie Caffey; uncle, Manuiel Caffey Jr. and a cousin, Joletha Thomas.

Demond Marcel Caffey was born January 8, 1973, the first of two children born to Robert Buster and Vivian Caffey Thomas. He was baptized at Mount Calvary Missionary Baptist Church in 2016 by Reverend Ricky D. Dixon, and remained a member until... View Obituary & Service Information

The family of Demond Caffey created this Life Tributes page to make it easy to share your memories.

Send flowers to the Caffey family.