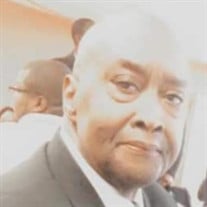 Clarence Boxley Jr. was born April 24, 1956 in Chicago, IL to Gladys and Clarence Boxley Sr. He graduated from St. Anne High School in 1974 and received his Bachelor’s Degree from ITT Technical Institute in Chicago, IL. He was self-employed at B & B Construction. He was united in holy matrimony to the former Denise Campbell on June 14, 1974. He was a member of the Free Masons. Clarence was charismatic and very faithful. He believed there was nothing he couldn’t do and willingly imparted his knowledge to others. He enjoyed drawing, building, going to the park, playing computer games and listening to music. He leaves to cherish his memory, his wife, Denise Boxley of Kankakee, IL; a son, Clarence Boxley III of Kankakee, IL; daughters, Karen Campbell of Bourbonnais, IL, Twanna Campbell of Homewood, IL, Cori Boxley (Alfred) of Delaware and Keisai Boxley of Kankakee, IL; brothers, Robert (Diane) Boxley of Dolton, IL, Douglas (Erica) Boxley of Chicago, IL and Gregory Queen of Florida; sisters, Joyce Seaton and Queenola Boxley-Smith, both of Dolton, IL and Beverly Queen-Thomas of Chicago, IL; aunts, Lois Hickman of Monee, IL and Martha Jean Queen of Indiana; uncles, Ozell Hickmon and James (Paulette) Haywood, both of Chicago, IL; 12 grandchildren; four great-grandchildren and a host of nieces, nephews, other relatives and friends. He was preceded in death by his parents; a son, Tracy Campbell; a daughter, Timeka Boxley-Felton and a grandson, Justin Boxley.

Clarence Boxley Jr. was born April 24, 1956 in Chicago, IL to Gladys and Clarence Boxley Sr. He graduated from St. Anne High School in 1974 and received his Bachelor&#8217;s Degree from ITT Technical Institute in Chicago, IL. He was self-employed... View Obituary & Service Information

The family of Clarence Boxley Jr. created this Life Tributes page to make it easy to share your memories.

Send flowers to the Boxley family.