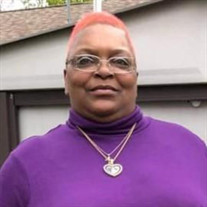 Brenda Sherman was born December 27, 1972 in Joliet, IL to the late Margie Nell Lindsey, and to the late Edward Lucas. She was united in holy matrimony to Henry Sherman on October 28, 2009. Brenda grew up in Joliet, IL and soon after that, she relocated to Kankakee, IL, with the love of her life, Henry Sherman Sr., a town she loved and never left until her untimely departure. Although Brenda held many roles in her life, her favorite was being a loving wife, and a phenomenal mother to her Sherman 5, and extraordinary grandmother. Her hobbies were getting her nails done, playing coin master, watching good TV shows and movies, with a glass of wine; and most of all, spending time with her family, who loved her dearly. Brenda will be truly missed and always remembered. To know her was to love her. Brenda touched so many hearts with her time here on earth. Brenda leaves to cherish her memories: her husband, Henry Sherman Sr. of Kankakee, IL; her children, Tommie Sherman of Kankakee, IL, Margienell (Robert) Thurman of Pembroke, IL, Shakyra Sherman of Bourbonnais, IL, Henry Sherman Jr. and William Sherman, both of Kankakee, IL; her sisters, Elnora (Walter) Massengill, Tambra, Wilma, Tracy, Robin, and Deatress Lindsey, all of Joliet, IL, Lisa Lindsey of Kankakee, IL and Lisa Lucas of Joliet, IL; brothers, John (Rowena) Lindsey of Joliet, IL, Robert D. Jones Sr. of Kankakee, IL, Edward Lucas Jr. and Jermain Lucas, both of Joliet, IL; 11 grandchildren, and numerous nieces, nephews, cousins, other relatives and friends. Brenda was preceded in death by her mother, Margie Nell Lindsey (1989); her father, Edward Lucas (2020); her bonus mother-in-love, Irene Sherman (2007); four brothers, William Lindsey, Lawrence Moore, Gerald T. Lindsey Sr. and Jeffery Lindsey; one sister, Sisco McKnight, and her paternal grandparents.

Brenda Sherman was born December 27, 1972 in Joliet, IL to the late Margie Nell Lindsey, and to the late Edward Lucas. She was united in holy matrimony to Henry Sherman on October 28, 2009. Brenda grew up in Joliet, IL and soon after that,... View Obituary & Service Information

The family of Brenda Sherman created this Life Tributes page to make it easy to share your memories.

Send flowers to the Sherman family.