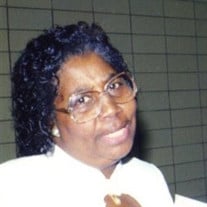 Barbara Marie Crite, affectionally known as &#8220;Auntie Marie&#8221; was born on February 4, 1937, in Chicago, IL to the parents of Martha Marshall-Mitchell and Thomas Revere Mitchell. In 1954 she married Elijah Dabney. To this union were... View Obituary & Service Information

The family of Barbara Dabney Crite created this Life Tributes page to make it easy to share your memories.