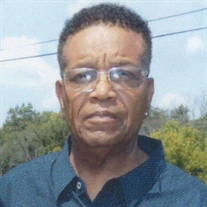 Arinza Martin Sr. was born in Atlanta, Georgia on March 16, 1947 to Gilbert and Annie Mae Smith Martin. He was the first born son to this union. He accepted Christ at an early age at the Church of Christ in Kankakee, IL. Affectionately known as Rin and Renzo, Arinza was raised in Chicago and Kankakee, IL. He attended Montefiore High School in Chicago, IL. Arinza worked for the Momence Meat Packing Company and a host of other companies in the Kankakee/Momence area. Arinza attended truck driving school in Indiana and Wisconsin where he received his Commercial Driver’s License. His passion was driving trucks and he drove for Bay & Bay Trucking in Rosemont, Minnesota and Marco Company in Hugo, Minnesota until his heath failed. He loved to sing and he especially loved the sounds of Motown music. He loved listening to the gospel singer, Lee Williams, Sam Cook, Al Green, Bobby Womack and Jackie Wilson, just to name a few. In his early years he sang with the up-and-coming do wop groups in and around the Chicagoland area. He also loved stepping to the old school music and most importantly he loved dressing up in the finest of clothes. On February 18, 2020 at 7:30 a.m. Arinza was called home to be with the Lord. He was preceded in death by his parents; three sisters; Amanda Thorpe, Linda Brown and Wanda Martin; one brother, Michael Martin, one niece, Joyce Martin and one daughter, Trina Martin. Arinza leaves to cherish his loving memories, his soulmate, Yvette Adams of Baldwin, WI; two daughters, Sonya Martin of Sacramento, CA. and Ariana (Courvoisier Prewitt) Martin of Minneapolis, MN; three sons, Arinza Martin Jr. of Milwaukee, WI, Arinza Martin of Seattle, WA and Lewis Martin of St. Paul, MN; one sister and brother in law, Rochelle and Carlos Jordan of Aroma Park, IL, and a host of grandchildren, great-grandchildren, nieces, nephews, cousins, and other relatives and friends. Arinza raised Adele Stapleton, Shalonda Johnson, and Lisa Brent, three daughters of Lavonia Polk whom he loved dearly. Special friends, James Bell, Amos Stevenson and Fred Williams, and George Miles, (deceased).

Arinza Martin Sr. was born in Atlanta, Georgia on March 16, 1947 to Gilbert and Annie Mae Smith Martin. He was the first born son to this union. He accepted Christ at an early age at the Church of Christ in Kankakee, IL. Affectionately known... View Obituary & Service Information

The family of Arinza Martin Sr. created this Life Tributes page to make it easy to share your memories.

Send flowers to the Martin family.