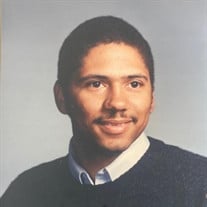 Anthony (Tony) Taborn was born on June 28, 1962 at St. Mary’s Hospital in Kankakee, Illinois. He was the third child born to Ural and Mabel Taborn. Tony accepted Christ at an early age and was a member of Wildwood Church of the Nazarene. Tony graduated from Westview High School in 1980. He continued his studies at ITT Technical College in Indianapolis, Indiana where he graduated with a degree in HVAC. After graduation, Tony began working for General Foods and later at BASF Chemical Corporation, formerly Cognis Corporation where he retired after 33 years of service. Tony was a recognized Member of the Illinois State Black Chamber of Commerce, Member of Illinois Press Association and served as the South Suburban News Tinley Park Progress Circulation Director. He served as an Assistant Little League Baseball Coach through the Kankakee Jaycees and also the Bourbonnais Park District. Tony was united in holy matrimony to Phyllis Green on November 28, 1998, and their union born two children, Phillip Anthony and Anthony Aaron Taborn. As a resident of Kankakee and later Bourbonnais for 59 years, he will always be remembered most for his loyalty to his family and friends, fishing, all sports, always willing to assist his family and friends with various odd jobs and most importantly, spending time with his two sons. At the age of 59, Tony unexpectantly passed away on Friday, July 30, 2021, at Loyola University Medical Center in Chicago, Illinois. He leaves to cherish his loving memory, his former wife, Phyllis Taborn of Orland Park, his two sons, Phillip Anthony Taborn and Anthony Aaron Taborn of Bourbonnais, his mother, Mabel Taborn of Bourbonnais, his brother Gregory Taborn of Chicago, brother Kim and sister-in-law Sylisa Taborn of Bloomington, brother Brian and sister-in-law Malicho Taborn of Matteson; nieces, Brianna Taborn of Chicago, Kimya Taborn of Bloomington; nephews, Demetrius Taborn of Belvidere, Christian Taborn of Michigan, and Matthew Taborn of Washington, and a host of beloved relatives and friends. He was preceded in death by his father, Ural Taborn.

Anthony (Tony) Taborn was born on June 28, 1962 at St. Mary&#8217;s Hospital in Kankakee, Illinois. He was the third child born to Ural and Mabel Taborn. Tony accepted Christ at an early age and was a member of Wildwood Church of the Nazarene.... View Obituary & Service Information

The family of Anthony Taborn created this Life Tributes page to make it easy to share your memories.

Send flowers to the Taborn family.