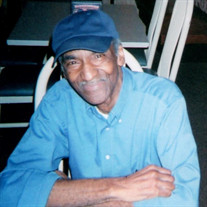 Alvin Brewton, 81, of Kankakee, IL, died March 14, 2019 at Riverside Medical Center. A memorial visitation will be held on Saturday, March 30, 2019 at Lax Mortuary from 12:00 P.M. until the time of the memorial service at 1:00 P.M. Cremation rites to be accorded. Alvin E. Brewton was born June 3, 1937 in Chicago, IL to the union of Zett and Minnie Brewton. Alvin was the first of 11 children and lived his younger years in Morgan Park and during his early teens he and the family moved to Pembroke Township, IL. He attended and graduated from St. Anne High School in St. Anne, IL. A couple of years after graduation he spent two years in Germany. Upon his return home he worked for Agar Meat Packing, Momence, IL; later he sought employment at Bunge in Bradley, IL and spent the remainder of his working years there. Alvin enjoyed building and collecting model cars and spent many of his days enjoying this hobby. He was always open to a good conversation on a wide range of topics. Alvin will always be remembered by his 10 brothers and sisters: Nolan(Margaret), CA; Raymond (Sonia), GA); Theodore, GA; Kenneth (Asaline), GA; Leroy; Warren, IL; Norman (Katherine), IL; Alberta, IL; Olivia (Jerry), IL; Linda, IL and a host of nephews, nieces, cousins and friends. Alvin was preceded in death by his mother and father- Minnie and Zett Brewton.

The family of ALVIN BREWTON created this Life Tributes page to make it easy to share your memories.

Send flowers to the BREWTON family.